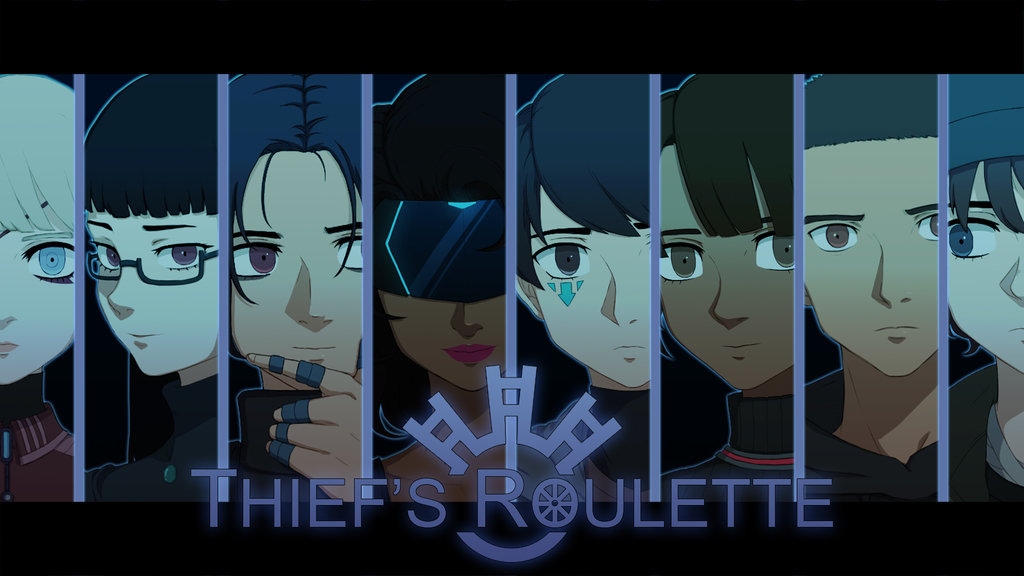 A Puzzling Thriller inspired by the Zero Escape and Danganronpa series. All purchases help support the development of the game.

Latest Updates from Our Project:

This will be mostly a picture dump. I'll start with some screenshots, then end with all of the Character Art.

I feel like I may have reached the limit of what I want to show in the game...

Especially when it comes to Challenge Rooms, I'll have to get really funky with my angles. Every Room that I've shown so far have much more to them, but those discovery moments will be better spoiler free! Not to mention there's a little bit more than I'm keeping to myself to use for the final trailer that I'm putting together now.

I made some more presentable arrangements of the characters. 5 pics, 3 different characters in each. I recently updated Roland, so you'll see his new art in his pic. Each image will be clickable if you want to see the full size. I'm still self conscious about their legs, so you'll only get to see them in game.

And that's the cast.

I'm still very tempted to update all of the art again, but I will just have to restrain myself. Everytime I post  art, I instantly see everything that can be improved. I can't touch the art anymore if I want to finish the game in a reasonable amount of time. Is what it is...

But on the topic of updating art, here's the old versions of the characters' art (minus the MC) from back in 2019:

I kinda like this old angry MC more, but that didn't fit with his character. I see right away that everyone's eyes got bigger. Maybe I'll allow myself to make them all a bit smaller, but I promise not to touch anything else.

That's all I got. The next update lands on the 19th, but I'll make a small one a couple days early on the 16th, as that is the day of the final demo's release. It will be fully public, on Steam and Itch.io.

This turned out to be yet another small update, but unlike last time I do have some visuals to show at least. It's just as the title says, so I'll get right to it:

New art for the main character. He didn't change much at all, but I felt the way that he was drawn was no longer in line with the rest of the cast. So now, I can say that he very much is. In the next update I should be officially done with all of the character art, so I can then put together a big collection of all of the characters' final art. Maybe even show the art progression for the characters that changed a lot.

Lastly, I took a couple more screenshots of some locations:

I swear the whole game isn't in the dark,  but I do like my moody environments.

And that's it. The next update will be June 5th, so I'll have a little more to share then.

I don't have much at all to show this time. Some of these updates are going to get pretty tiny since I want to keep so much of what I haven't shown a secret. So no visuals today, but if you're interested, here is everything that I've been working on since the last update:

Other than that I just want to remind everyone that on June 16 I will be releasing the final demo for the game. It will include some of what was in the Backer Only demo, but with a few changes and improvements.

It will be released during Steam's "Next Fest." Pretty much the same as the game festivals they've been hosting but with a different name. I will also release the demo on Itch.io that same day. It will be totally public, so everyone will be free to share/record it all they want.

That's all I got. Later.

This will be more of a picture dump for some of the new things I've been working on. Unfortunately again... I do not have the new art complete. I wanted to show it all off in one update, but it's not done. Since I'm delaying that again, I'll just let you know now that it's final (seriously this time) character art for a couple characters including the Main Character. After that's done, I can't touch the art anymore. I'm way too far in at this point!


If you don't want to be spoiled on any of these locations (besides the one you can clearly see below) then you should stop here.

Let's get right to it:

I'm adding some more visual detail to the game's environments now. Still gotta keep some things hidden, but I've updated almost the whole game visually. I even made some changes to Challenge Room 1 and 2, which will make their appearances in the June Demo.

I already feel like I've shown too much, but it's been a while since I've posted some actual new stuff so this is pretty long overdue. Although, I think I'm going to officially dial back (even more) on showing Challenge Rooms. I think the variation in the way that they look compared to one another will play a big part in your enjoyment of the game. At least I hope as much. I want you to feel like you know what you're going to get, only to be surprised by what comes next. Not only in the game's environments, but even the game's structure.

That's all for this Update. Going forward I'm going to show less Challenge Rooms, but there's still more things to show off in the future.

Pretty short one again... I think this is why Kickstarters usually don't do updates this often! We are on update 82 after all. Having a schedule keeps me on track and making steady progress, but it means that sometimes these updates won't be very big. That being said, here is what I have to show this time:

A Challenge Room I haven't shown in a while. There will be a lot of visual variety in this one.

These videos have some elements redacted as not to spoil too much, but the environments are "final" structurally.

Another Challenge Room location. I cleared the tables and walls, though. Still looks pretty decent, but there's a lot more to see when you play!

And finally, I've decided to redo the Dining Room. It's not finished, but it will be very soon. I guess I could have continued with the original one, but I decided to combine the previous 2 rooms into 1. I think this looks good, and the larger size works a lot better for the group cutscenes that take place in the Dining Room. Fortunately, with the way that Cutscenes are being handled, I won't need to remake any of those cutscenes, despite this makeover.

That's all I got for now. I've done much more than this, but there really isn't much I want to be showing at this point. Even those first 2 Challenge Room videos were going to be kept under wraps, so I just wound up stripping them down a bit before recording. I wanted to post some new art for this update, but they weren't finished in time. Next time I will post them for sure!